Cheap Flights from London to New York by Aer Lingus

Look at the list of plane tickets for the most connecting flights by Aer Lingus, their prices start from $743. There’re no direct flights. The fastest connecting flight – 10h 45m.
Show All Flights
*Departure and arrival times are local. Prices are for one-way flights. Information refreshed on 11/29/2022

The cheapest flight by Aer Lingus that our users were able to find is $743. This airfare is economy class on one-way EI291 flight for December 4, 2022 leaving London City in London at 8:00 pm, it includes all taxes and additional fees.

Aer Lingus Airplanes on the Route

List of the most popular Aer Lingus airplanes flying from London to New York:

Besides Aer Lingus there are other 11 airline carriers between London and New York. Please review schedules and prices from the most popular airlines to find the best airfare deals from London to New York.

There are 10 direct flights every day from London. Airlines and fares are below: 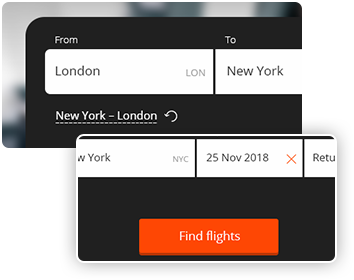